The artist Leo Beninga, who lives in Hamburg, is presenting his works for the first time in Bremen. His painting style – some-where between surrealism, art brut, CoBrA and abstract expressionism – is in good hands in the Roche gallery, since these schools of classical modernism have been attracting attention here since time immemorial. The almost 40-year history of the Bremen gallery has seen pictures by Jean Dubuffet, Richard Oelze, Unika Zürn and Ursula hung here, as well as the impressive oil painting “Bull’s Head” (1941) by Oscar Dominguez – artists whose works can be found as points of reference in the coordinate system of Leo Beninga’s paintings.

Beninga is a vivid creator of a world of the wonderful, whose pictures bear witness to a great degree of dreamlike content. His fantasies and intimations regarding hidden realities are manifested less in a precise, and often even prosaic, fantastic realism, but rather develop out of a gestural, abstract act of painting, of great sensuality. Gifted in matters of form, Beninga creates his structures and shapes from out of the intensively worked painting surface, and the painter does not make too much effort to conceal the traces of his form finding. They are allowed to remain part of the picture, as little short of proud impressions and upstanding vestiges. Leo Beninga is a painter who loves a drawing-like structure in his works, and, at the same time, a drawer who seems like a painter. With him, painting and drawing cannot be separated, whether on paper, wood, cardboard or, more recently, on canvas. Without proceeding arbitrarily or thoughtlessly, he experiments like a maverick, in a positive sense, and with a relative lack of restriction with all the techniques known to him, though his color palette has evidently expanded over the course of the past year. If one might have previously got the impression that the painter had made himself at home in light blue and turquoise atmospheres, by now, a wide variety of red hues have established a strong presence.

Inherent to the pictures shown in the exhibition is a puzzling and overall rather dark aura. They owe their suspenseful, pervasive effect to an exhortation to search for traces, which can also lead into those areas that border on the abyss and intoxication. The title of one of the exhibited works alludes directly to Georges Bataille’s Tears of Eros (1961), the last work published during the philosopher’s lifetime, which, taking cave painting as its starting point, devotes itself to the birth of eroticism out of art. This is interesting terrain for the artist in many ways. Leo Beninga has always harboured a longing for underground worlds, whether they are located in a grotto or under water. One should settle On the Seabed – after all, one has paid for the privilege with the Gift to the Underworld.

In the course of this, Beninga occasionally pushes forth into the archetypal. In his free referencing of the beginnings of painting, his subjects and colours at times remind one of the cave paintings of Lascaux, as if his infinite animals were a powerful expression of primal principles. A show of beautiful monsters, divine creatures and revered beasts, a game of noble hellhounds and shiny reptiles, a happening of sovereign birds of prey and factory-made insects. And when the light falls favourably, the inadequacies and the defects of the protagonists are of no consequence – after all, they are at the same time, and without any doubt, impressive and imposing apparitions. Stone washed, cheaply dented, pleasantly scratched, sympathetically scarred, Beninga’s animals appear elevated above their hunters and tormentors, as if no Golden Net, no Beautiful Hole, no Homegrown Trap could ever do away with them. In the face of these reflections, one could almost think that their tears, wounds, and even their captivity, are only necessary intermediate narrative stages and obligatory building blocks of what is always the same ritual, which, when executed as it is in painting, finds healing or resuscitation, and, thus, its satisfying end. Yet Beninga’s distinctive, poetic style does not only bear upon his manner of painting and the fantastic visual worlds he has created; it finds it continuation, suspense and lyrical sustenance in a powerfully effective and often enigmatic process of titling. And the viewer looks for the empty princes in front of the barbed cathedrals, the southern animals in the dark pastures, the tarred angels in the scratched cities, the knights of the rose, the night-time swimmers, the dark festivals and the ghostly locusts of the tropics.

Beninga’s show of animals is an assembly of brave and autonomous jail-breakers. And who along the city‘s river Weser can or wants to stop them?! Do the Bremen Town Musicians not say: “You can find something better than death everywhere”? And even if the shadowy or smoky figure in A little bit above it is likely not exactly Dionysus, and even if the Admiral Voodoo, looking sinisterly at us, will likely not demand any blood sacrifice, but, at worst, may bestow a Voodoo Vortex upon the world, Beninga’s figures ap-pear unshakable, hungry and difficult to satisfy in their own way. Aware of their own death, striving for the impossible and, at the same time – and even because of this – immortal, they seem to be united, between tears and laughter, in their clamour for poetry and ecstasy, wallowing in fornication and lustfully celebrating the transgression.

The exhibition in the Roche gallery offers a good overview of Beninga’s paintings from 2016–2020 and forms a triumphant continuation of the successful Viennese exhibition The Hidden Day (2019) and the Hamburg show From the Souterrain to the Basement (2017/2018). The postponement of the exhibition by a good four months due to the corona crisis has undoubtedly yet further enriched this complete overview and gifted it some of its most striking and powerful pictures, which would have been absent from an exhibition in April. 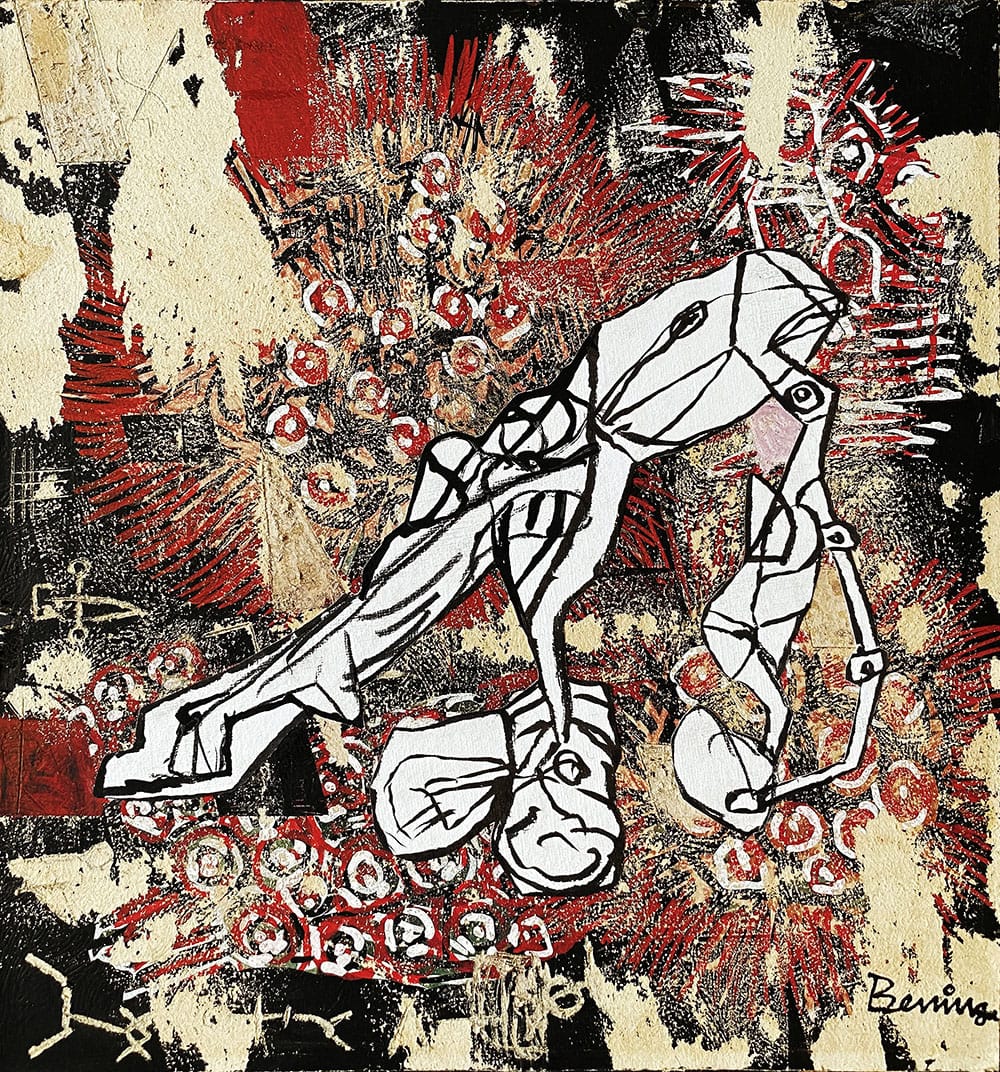 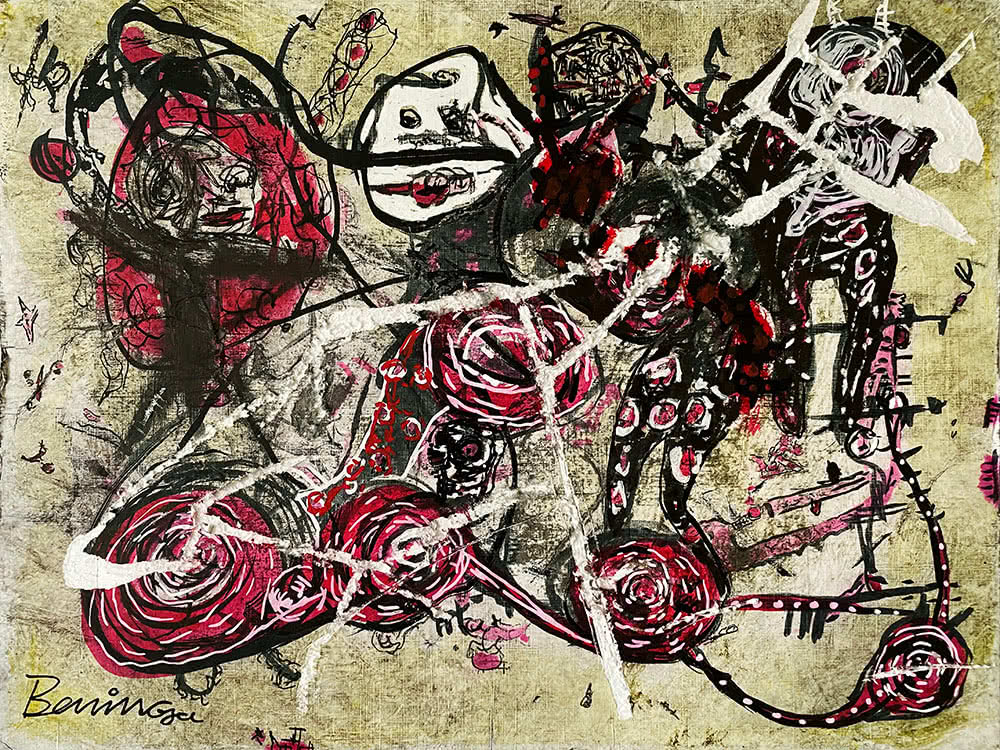 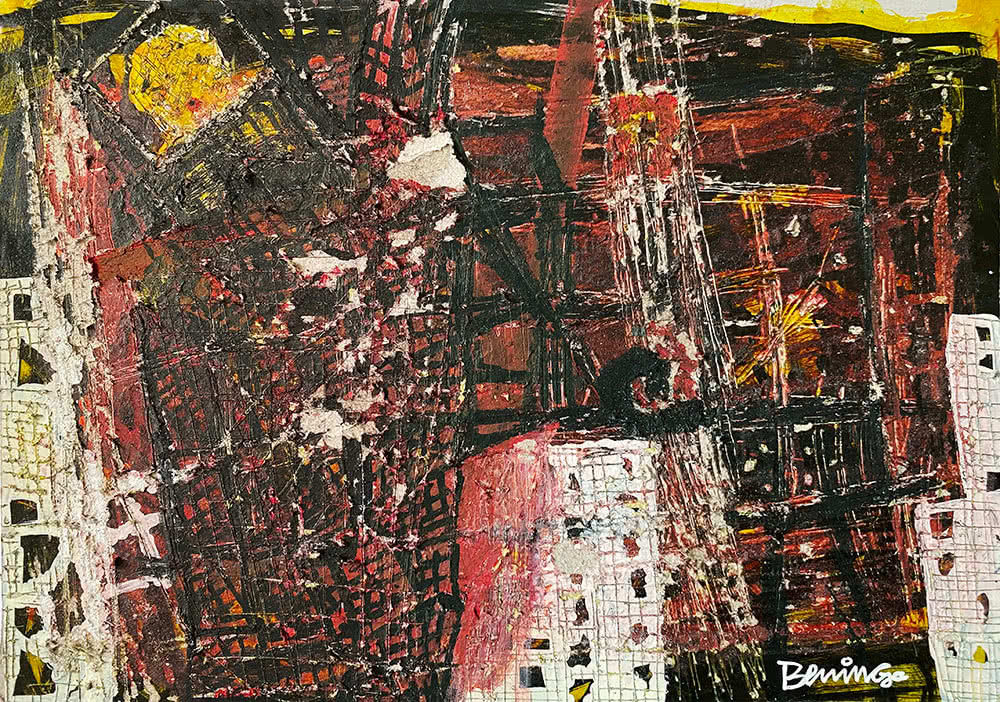 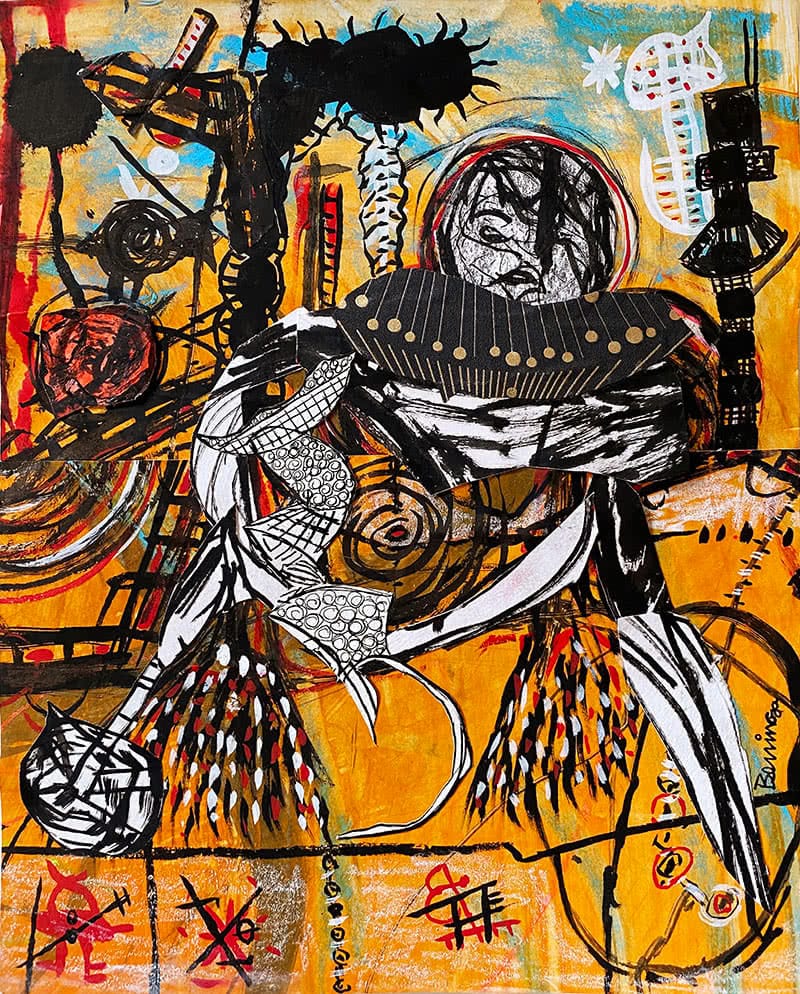 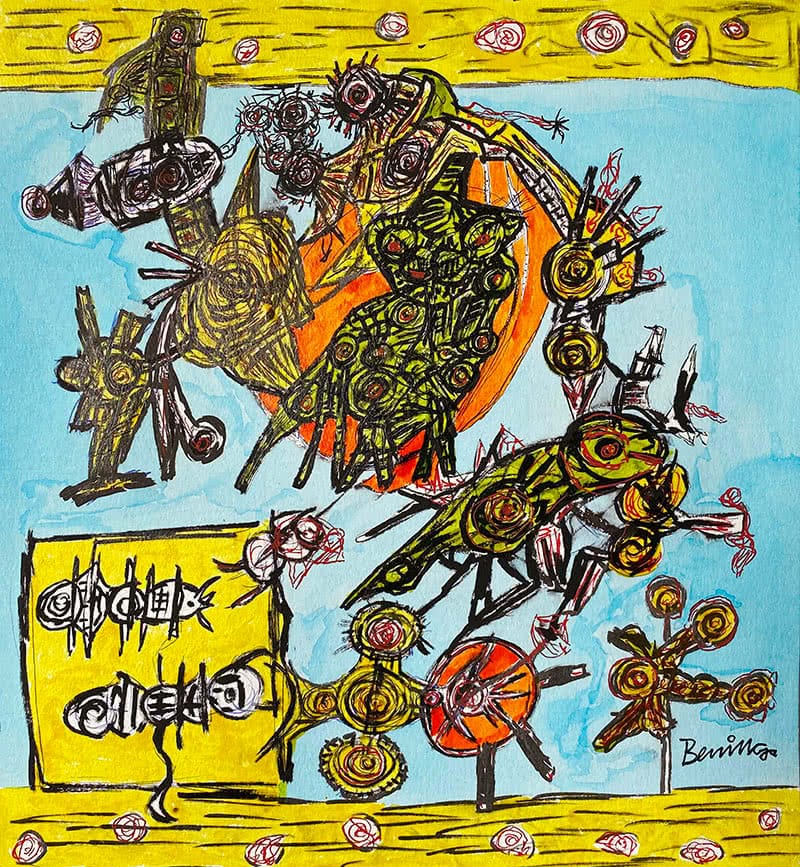 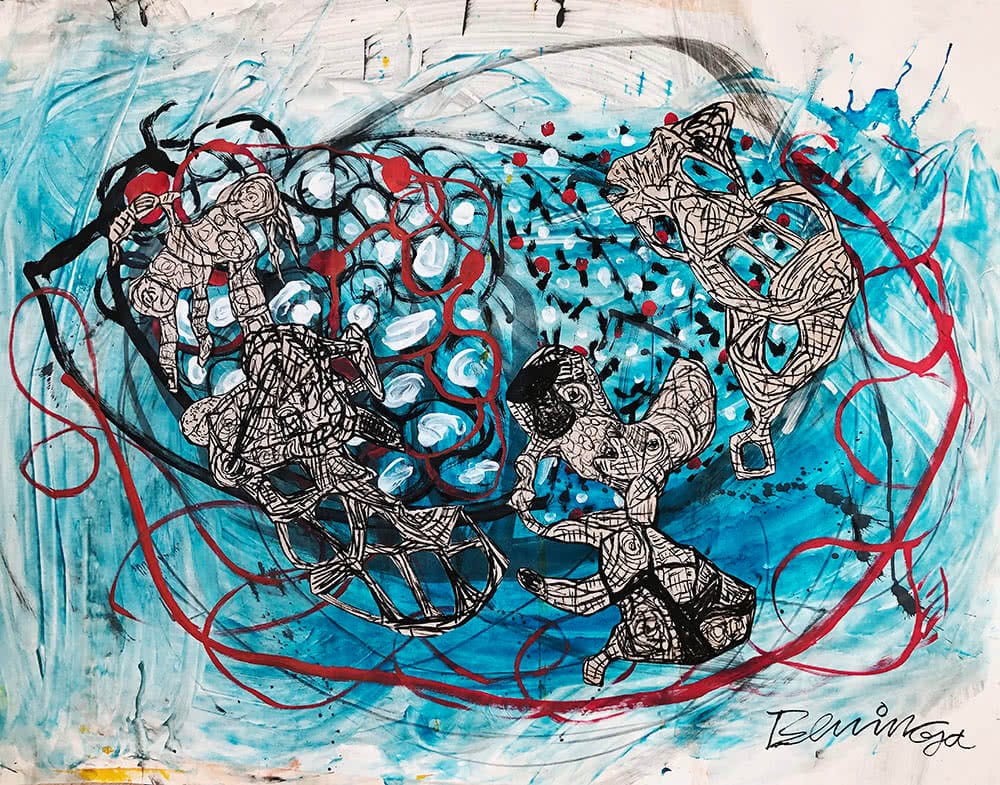 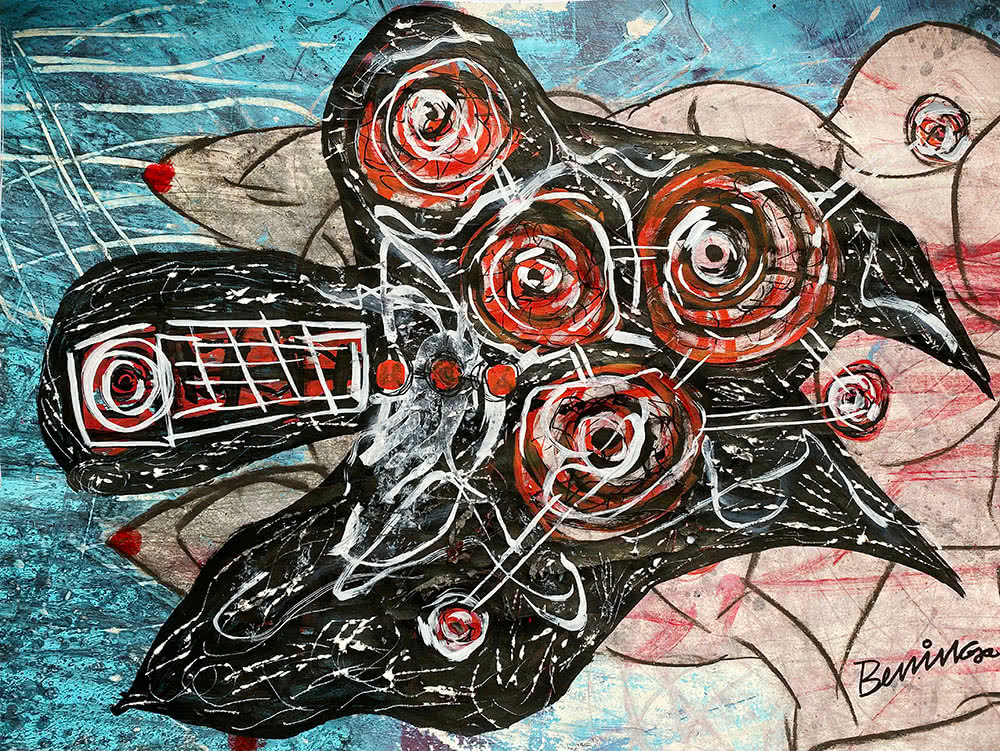 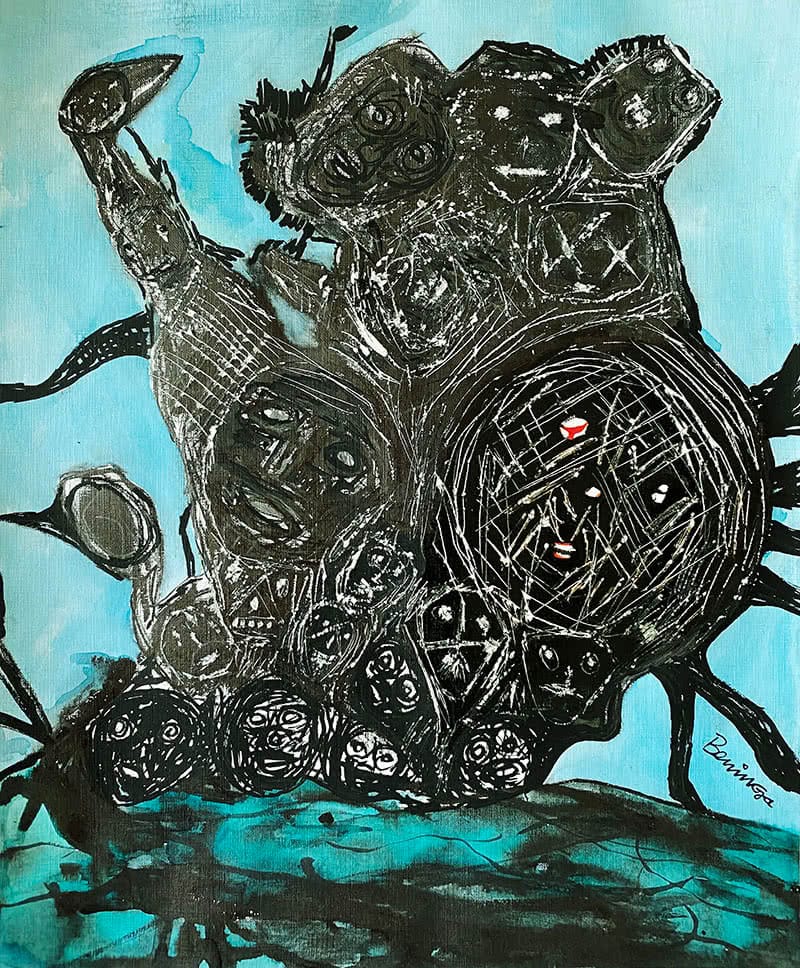 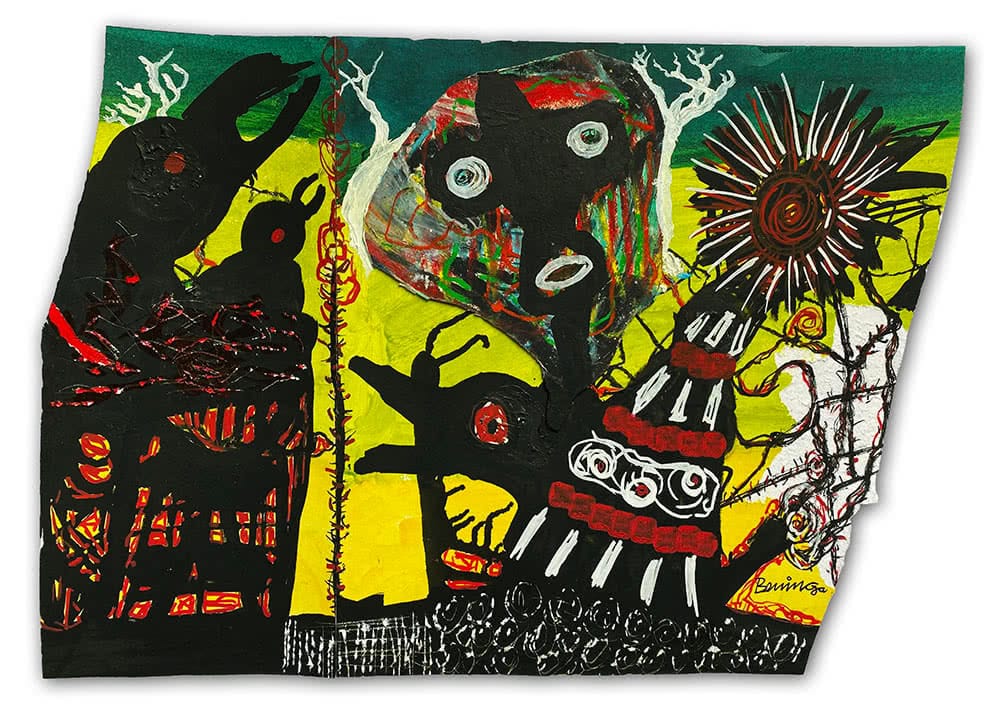 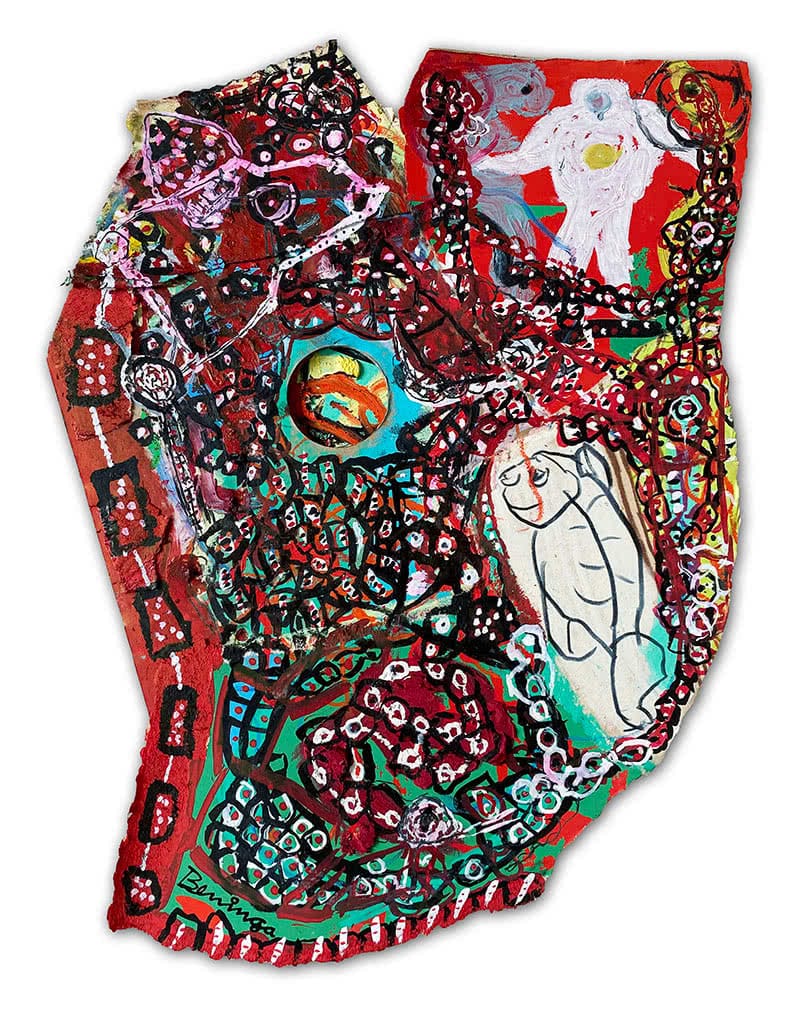 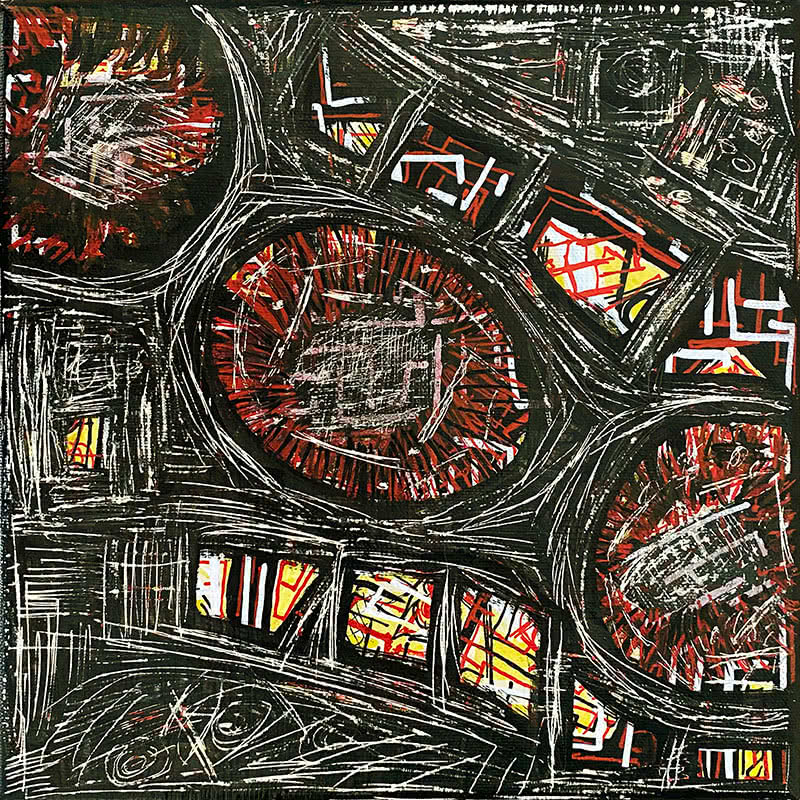 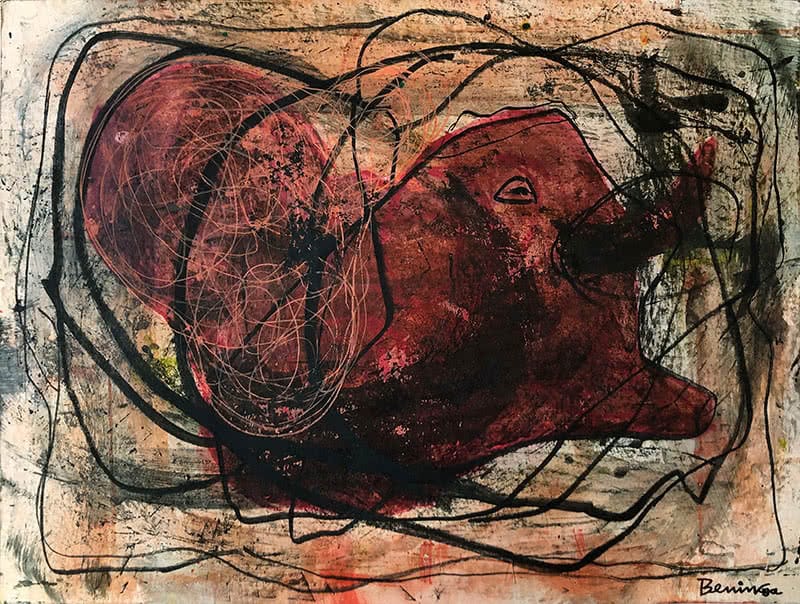 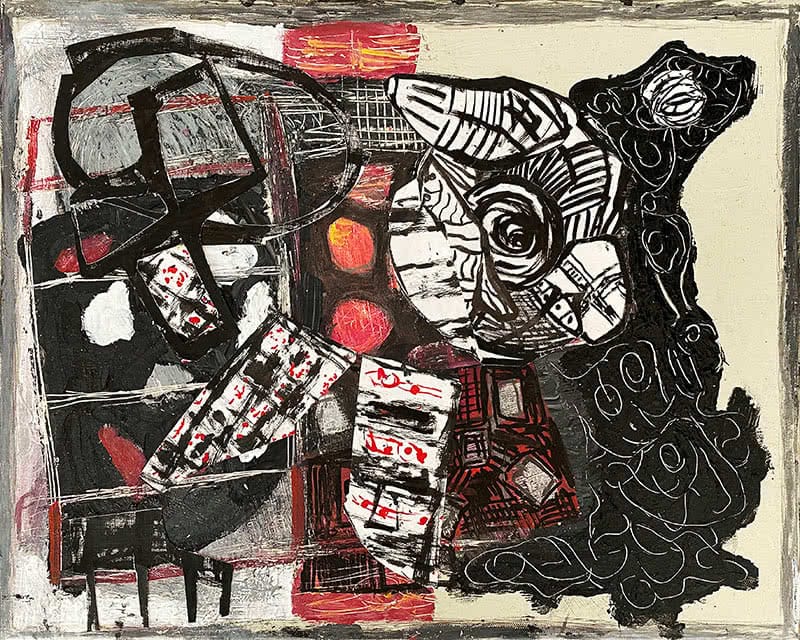 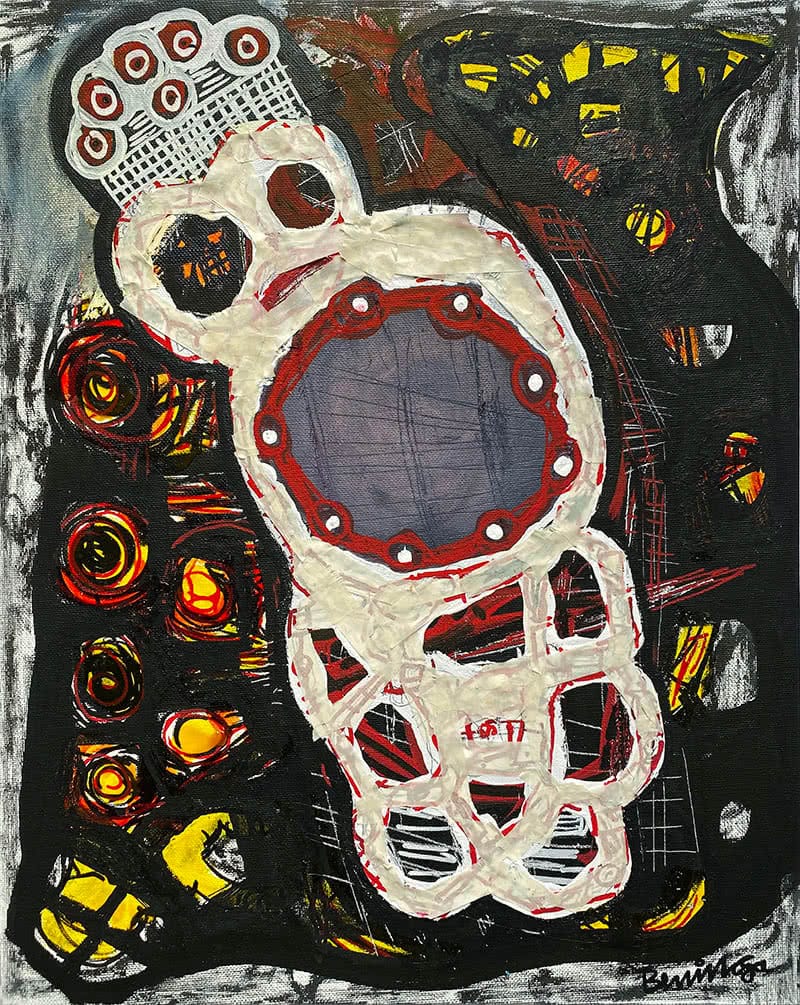 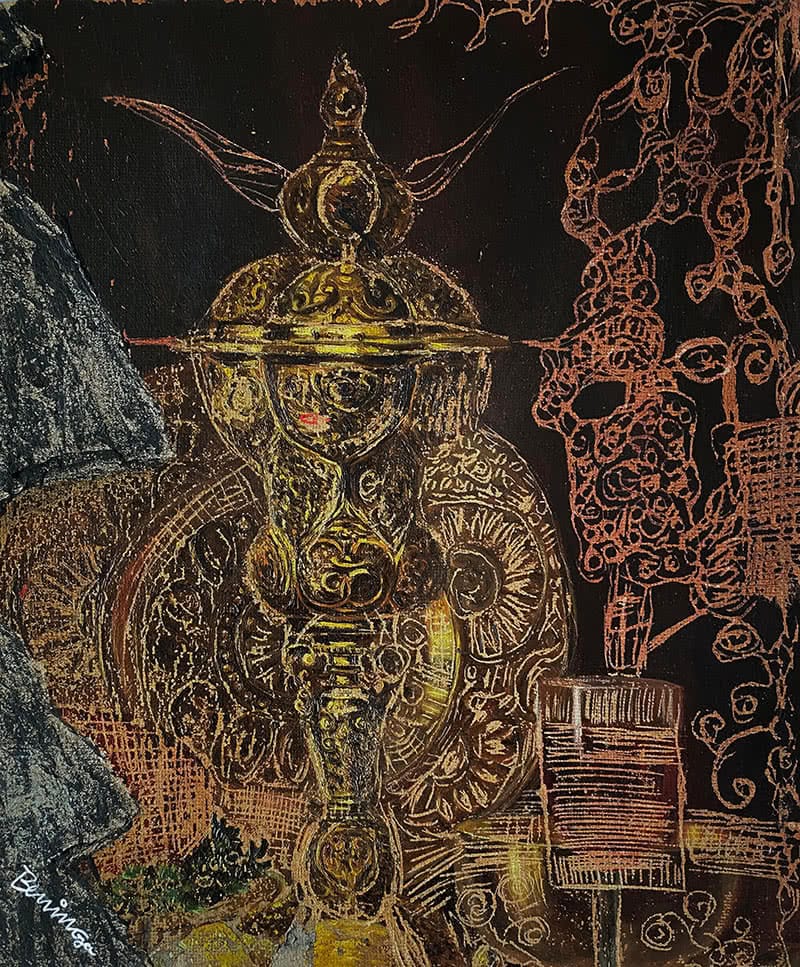 We use own and third party cookies to offer our services, customize and analyze your browsing and show advertising relating to your preferences. If you continue browsing, we'll consider that you accept its use. You can change settings and more information in the Cookies policy page.